To create a hub variable, select the New Variable button:

Then fill in the required information:

The table at the top of the Hub Variables page displays the current hub variables (if any have been created) and their current values. Note that current values only update on page reload or when the Refresh button is selected. The table also provides ways to manage these variables. 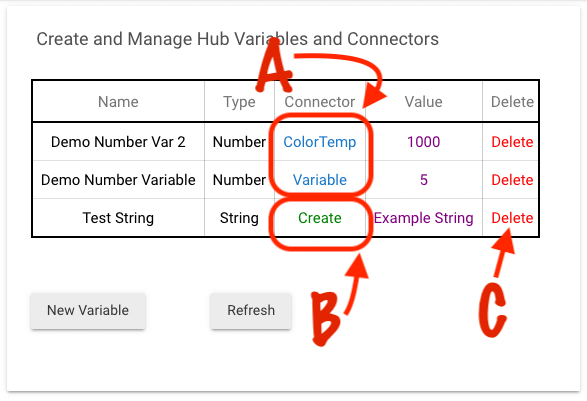 A connector is a device you can create that is tied to the hub variable. These devices can be used in apps that cannot work natively with hub variables, which some older apps or community apps may not support. More and more apps are becoming able to work with hub variables (a relatively new feature) directly. That option is preferred if available (for example, Hubitat Dashboard, Rule Machine with Rule 5.x and newer, and many other built-in apps and community apps can use hub variables directly).

If the app you're using does not support hub variables but does support a device of a supported connector type, then you can create a connector of the appropriate type for use with the app. Options vary based on variable type, but for example, a Number variable can be used with a Dimmer connector to set values 1-100 and can be used in an app that supports dimmer-type devices.

While variable values will generally be set by an app (e.g., a rule), the value can be set manually by selecting the current value under the Value column and providing a new value. (Note: the value is saved immediately.)

Finding Variables in Use By Apps

If a variable is in use by an app, the variable name in the Name column will appear in colored text, and selecting the variable name will pop up a list of apps that have registered their use of this variable. Select Done to dismiss this list and return to the hub variables table. This will not show instances that use only the variable connector, if created and used. Connectors act like regular devices, and their use can be checked by navigating to the connector device page and checking the In use by section.