Rule-5.0 is the culmination of a journey in the transformation of the Rule Machine app. All at once, it simplifies and adds power, resulting in a fully generalized automation engine. The prior top-level organization of Rule Machine has been replaced with an optimized interface. The changes described below, explain how prior rules were created versus how it is accomplished with Rule-5.0. The former structure of Rules, Triggers, Triggered Rules, Actions and Schedules are now replaced with the definition of what causes a rule to run, and the resulting action. The former Button Controller app is now incorporated into Rule Machine, but with increased power and flexibility. New conditional logic capabilities are provided, allowing the most subtle or complex automations to be created. You simply define what causes the a rule to run, and then that you want it to do.

In any Rule, the rule itself can be thought of as an overarching IF-THEN-ELSE, where if the condition was True for the IF part or the rule, then Actions for True are run, and if they are False, then Actions for False are run. In Rule-5.0, this same logic can now simply be done with the Conditional Actions of IF-THEN and ELSE in the Actions section of a rule. As described in the next section, IF-THEN now has the same full logical expression capability previously available, with the addition of AND, OR, XOR, NOT logical operators, and nested parenthetical sub-expressions.

All "Rules" in Rule-5.0 are in effect Triggered Rules. They each have a Trigger Event, and then Conditional Actions. Instead of a rule with Actions for True and Actions for False, they simply use conditional logic in the actions to create an equivalent IF-THEN-ELSE structure.

Each rule can have one or more Trigger Events that when triggered, cause the rule's actions to run.

Rule Machine allows the following events in a Hubitat Elevation system to be acted upon. Each event results in a single test and the supported events and states that can be tested are listed below. For each event that refers to a device, one or more devices can be selected, and then the device state required for the Condition to be met can be selected. When multiple devices are selected, the Condition/Event may apply for ANY (default) or ALL of the devices.

As you define actions, you are creating a script of actions to perform when the rule runs. You may use as many actions as you want for each Action type and they can be run in whatever order you want. There is no predefined order of execution for Rule Machine actions, so you may arrange the order of actions any way you want. You can insert a new action anywhere in the list of actions, or at the end of the list.

Actions can be modified

The Rule-5.0 user interface provides the ability to Edit and Delete any action you have defined, giving you complete control over your list of actions. 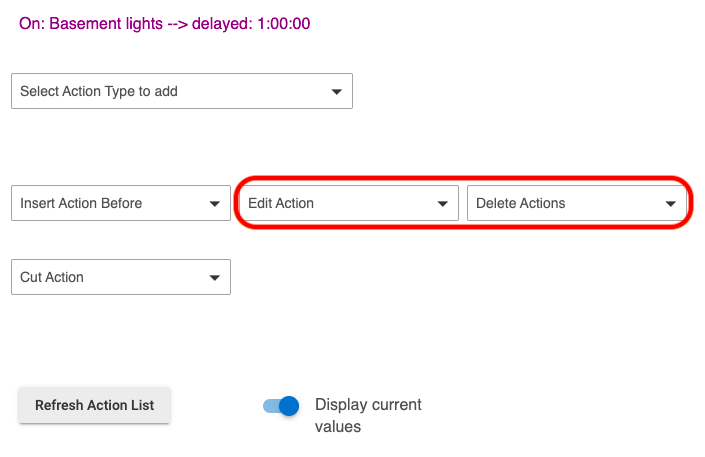 You may also Cut and then Paste actions if you need them to occur in a different order.

All actions can be delayed, effectively pausing the action execution for a specified amount of time. Actions may also be delayed for a period of time that is dependent on the current Mode by using Delay Actions Per Mode.

It is also possible to delay all actions (also with optional cancel). The script of actions runs sequentially when the rule runs, with each action happening in order. Actions with delays start their timer, which can vary for each action, and the next action in order runs. By using Delay Actions, the entire script can be paused by a delay.

Delay Actions can also be specified on a per mode basis, so that the time the script is paused, varies according to the current mode.

In Rule Machine, IF-THEN-ELSE-ENDIF conditional blocks can be nested. The user interface utilizes textual indentation to help guide you in keeping track of which IF-THEN-ELSE-ENDIF block you are currently adding actions to. The user is responsible for completing each level of nested IF-THEN blocks.

This combination of nested IF-THEN blocks and full logical expression for each IF-THEN and ELSE-IF, allows creativity for rules in Rule-5.0 that is limited only by your imagination. To help you with complex logic structures, new actions are available.

Portions of, or all of the script of an Action can be repeated periodically, but you must specify the time interval for the repetition. Be careful not to make this interval too short, as you can consume your hub CPU resources by repeating too quickly. You can select any number of iterations if desired, but some method to stop the repetition is required. When a Repeat Actions is introduced to the script, any action before END-REP will be repeated. Only the Actions between Repeat Actions and END-REP will be repeated. Actions following END-REP will run only once the repetition has stopped. There is an optional Stop for a Repeat Action choice and if selected, then Stop Repeating Actions will stop this repetition. Using Cancel Rule Timers from either the current rule or another rule, will stop all Repeat Actions, irrespective of which Stop selection is used.

Wait for Events and Wait for Conditions

Wait for Conditions also has an option to use Duration instead of a Timeout period, allowing you to specify an amount of time that the Conditions must remain continuously true for the Wait to conclude. This is useful for many automations that require the passage of some time in a certain state, such as a door that has been left open for more than 5 minutes. The rule would Wait for Conditions that the door is open for a duration of 5 minutes, Following the Wait period, you could have a notification action. If the door was subsequently closed before the 5 minute duration period, the Wait wouldn't conclude. If the door opened again, the pending Wait would then be canceled, and a new one begins. Only if the door is opened and remains open for 5 minutes would the Wait conclude, and the notification be sent.

A Custom Action allows you to select a device, and send any of the commands that device supports along with parameters it may take. Custom Actions are created within your actions and they are specific to the rule where created.

Hub Variables are a setting for creating very efficient variables directly in the hub for use in other apps, not just in Rule Machine, as is the case with Local Variables. There are five types of Hub Variables available - Number, Decimal, String, Boolean and DateTime.

Each Hub Variable can have an associated Connector. A Connector is a virtual device linked to the Hub Variable. When the Hub Variable value changes, so does the Connector value, and vice versa. When the Connector device is set to a different value, the corresponding Hub Variable is set to that value. Connectors can be used in any app. The aforementioned DateTime, allows both Date and Time to be set. The use of Date has very limited applicability for now, specifically in the Certain Time trigger for Rule 5.0, where triggering on a specific date is possible; by using a DateTime connector, that can be a variable Date and Time.

Example: A Boolean variable for which a Switch Connector is created, will show On or Off as the possible values, rather than True or False.

When you first create a new rule, you are creating a child app of the parent Rule Machine app, and therefor you must select Done on the main page to install the Rule-5.0 rule. If you re-open the rule, its actions can be run by hitting Run Actions button. If you change the Trigger Events in any way, you must either select Done or the Update Rule button.

Select this option to allow export of your Rule Machine rules for import to another hub, or to clone an existing rule as a base from which to start a new rule. 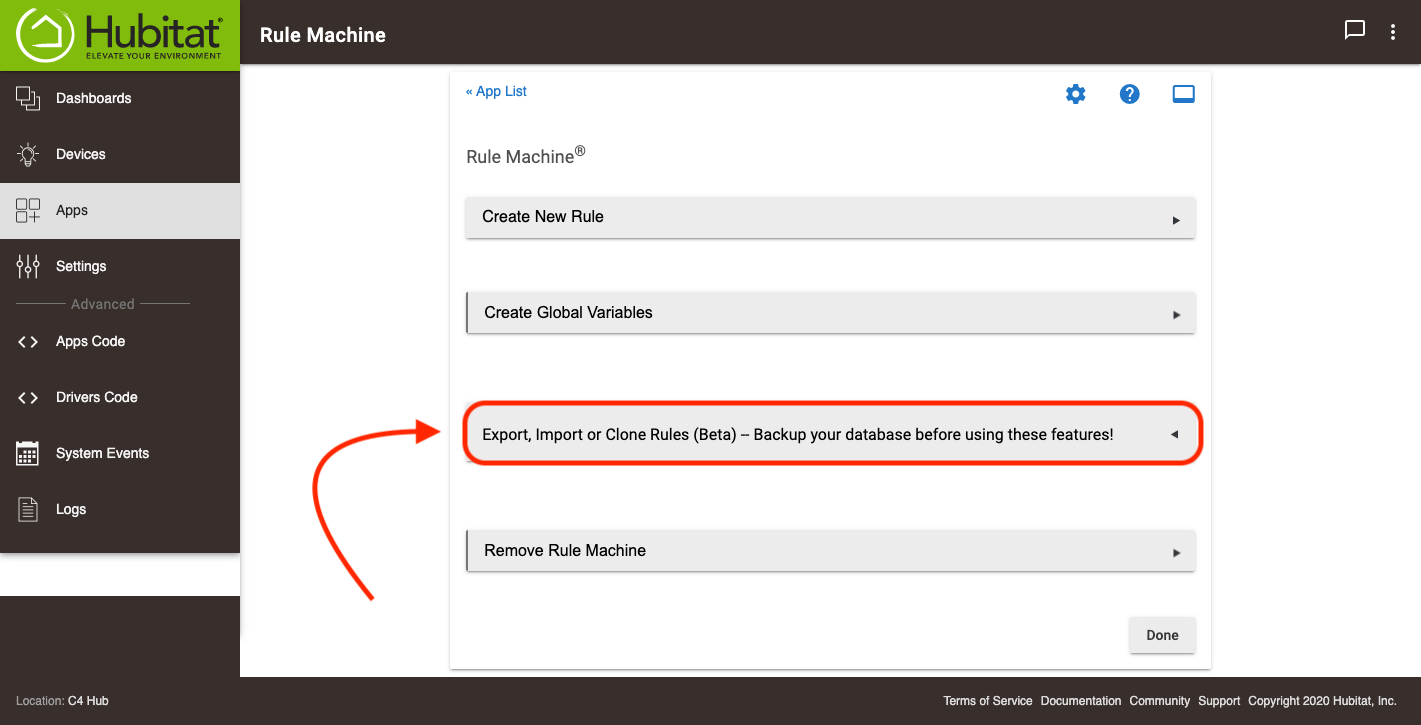 Restore or Import a Rule

You may choose to Restore a rule instead of using the Import option. This is most appropriate for instances where you want to bring a Rule Machine rule into your hub database, but you do not want to change the name or the devices used in the rule. If you instead choose to Import, the process will pause to allow the rule to be renamed, and the devices used in the rule to be substituted with other devices installed on your hub before completing the import process.